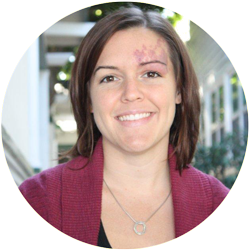 Cara
When you see her today, Cara is an outgoing, driven, and dedicated mother and entrepreneur with a rich, full life and a strong head on her shoulders. This was not the case many years ago though, when addictions to drugs and alcohol weighed down her every move. She may have stayed there had she not found House of Hope in October 2007.

The daughter of an alcoholic father, Cara had an introduction to AA meetings at an early age. Ironically though, it was with the daughter of one of her father’s AA friends that Cara first drank when she was in junior high. It was the first time in her life that she didn’t feel judged, singled out, or out of place—she felt like she had finally found a way to fit in.

Towards the end of high school Cara’s choices caused her life to spiral out of control. In the span of three years, from ages 18-21, she was trapped in a whirlwind of drinking, partying, and abuse of meth, crack, pot, ecstasy, and binge eating. She was finally arrested in 2006 for possession, trafficking, and intent to sell, and was sentenced to an outpatient treatment program. However, her complete lack of control in her life led to failure of that program, and the judge said she either needed to go to a residential treatment program—House of Hope, specifically—or jail. She chose House of Hope.

Cara’s experience at House of Hope was unlike anything she could have expected. She says, “I learned how to be responsible, respectful, respectable, and considerate, and I also learned how to be a woman of dignity. I learned how to be friends with other women, and I got to reconnect with my family. During Family Nights, both of my parents attended, and while there were some demons to squash, there was also a ton of love rekindled.”

Today Cara is married to a wonderful Navy sailor who’s a “normy,” as she likes to call him (aka non-alcoholic), and they have a two-year-old daughter named Maisie. She earned her BSBA at California State University in 2014 and now has a successful freelance marketing business, which she runs out of their home (currently in South Korea!). She has 11 years clean and sober and can’t imagine life any other way. No matter what’s been thrown at her, Cara has been able to tackle it all with the strength and tools she developed at House of Hope, and she will be forever grateful for that.

As a non-profit, House of Hope relies greatly on the support and generosity that comes through various individuals, organizations, and grants. Helping our women recover from the ravages of their addiction is the mission of House of Hope.